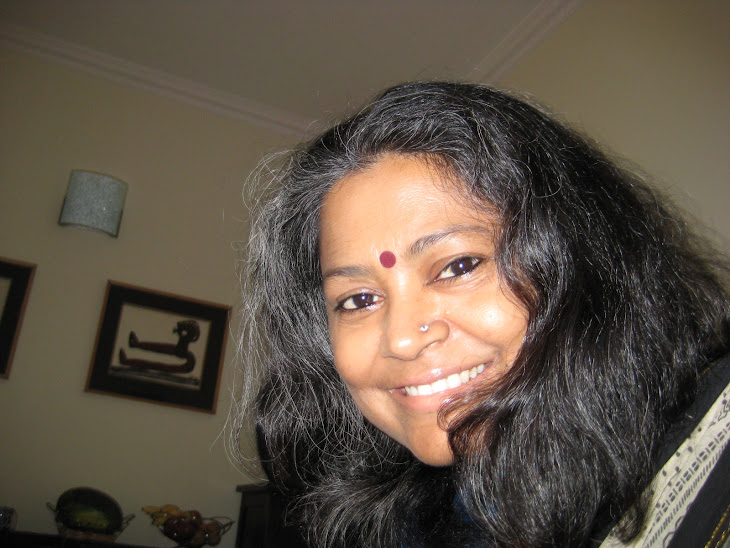 So, do come and visit me there. 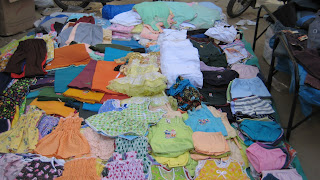 Today I went out with friend Vishnu who also acts my guide to discovering Bengaluru, to Sultanpet weekly second hand goods market. The market comes alive once a week and all kinds of second hand goods are available there .... electrical, electronic, shoes, cloths, hardware, etc, etc.

The place was teeming with people of all shapes and sizes ..... women wearing colourful cloths, toddlers holding on to their parents, teenagers hanging out just for fun, weary middle aged people who are out there for a good bargain ... 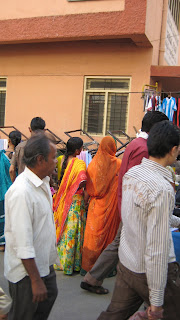 And in this melee, autos and cars were vying for space among hundreds of people ... it was amazing to see that actually everyone was getting their way, albeit making others to go out of theirs!

People who come to this market are looking for cheap products and to bargain for some more. We had people scrambling to buy mobile phones for Rs. 100, which were chinese made. I could not help but wonder whether they would actually work, but I guess people who were buying had some reason to scramble for them.

The whole market place was such a unique and lovely experience for me. I felt both lost and connected with people on the street and with the life that was thriving and throbbing right there.
Posted by Sharbori at 01:00 4 comments

Sexuality and Old Age - In India or Anywhere Else

Ok, so this is a taboo subject … for all of us … in India or anywhere else, except may be in some of the tribes who have not been infected by our kind of “civilization”.

So what is it that I want to write about? Sexuality in old age, or the way society looks at it? I am not sure, for the subject is so vast and there are so many things to say, that I think I will limit this post only on one or two aspects.

First of all, I believe that

- the idea of sexuality for long has been confined largely to heaving, gleaming bodies entwined in lust, but bodies which are young, muscular or shapely.
- that in popular myths, sexuality is, all about lust and fulfillment of that through sexual intercourse and that too is when you are young in your body.
- That Images of people with lined faces, slacking muscles and shaking hands, embracing each other in a lustful way makes some of us feel uncomfortable and evokes disgust and shame.

Sexuality itself is such a taboo subject that we can indulge in it only through forbidden or voyeuristic pleasures or by sublimating it a higher philosophical plane where the body does not exist. In this scenario, sexuality in the elderly is not part of our collectively held image of the elderly in India.

In India, one of the collective images about the elderly is that of people who surrender in prayer to the divine, engaging in morning or evening walks to keep sickness at bay, playing the role of the babysitter/additional helping hand at home and/or waiting for death to come and rescue them. The other collective picture of the elderly (now brought to the fore by the media) is the healthy, smart, enthusiastic and independent (read deep pocketed) individual who doesn’t mind flirting with her spouse, goes out on holidays and has a good time.

I am not claiming that either of these pictures is undesirable. The issue that I am trying to bring to the fore is that what certainly happens in old age is that your body becomes less agile and one certainly feels less enthusiastic about sexuality as one did before. Immediate fulfillment of lust may not even be as important as it was before, but that does not mean that older people lose their lustfulness, their sexual arousal or their need for passionate and tender love from their partners.

Where I have a problem is that either older people are shown as “less than able” as compared to the youthful generation or their image is carefully built so that youthfulness is preserved in these characters. So even when they flirt or are provocative, they necessarily imitate the younger generation, and when get caught, they feel ashamed and have a strong need to hide it from others! (Remember one of the monthly income scheme ad?). My protest is towards inducing the subtle element of shame in these pictures. What is there to feel ashamed of?

Some of the recent studies state and I quote

“Humans have sex for several reasons. Sex serves many purposes not related to reproduction. Sex is a way to express love and it also provides the feeling of security and reconfirms the feelings shared between people, regardless of age. Sex has also been shown to calm people in stressful periods. Sex has a symbolic value, which is independent of age.

However sex between elderly people is often treated as a taboo by society. Whilst sex itself is a sensitive topic due to its private nature, sex between seniors is often treated with extra care. This attitude is especially common among younger people and it has been suggested that this may be caused by younger people's belief that the lust and ability to have sex diminishes once the primary reason for sex is no longer present.”

(for more information, you may also like to visit http://www.apa.org/pi/aging/resources/guides/sexuality.aspx)

All that I am trying to put up here is that as people grow older, their physical and emotional needs become different than when they were younger. While sexuality is certainly not only about sexual coitus but also of passion, intimacy, tenderness and is emotionally fulfilling; physical intimacy and yes, the bad word "intercourse" does play a significant part in it. Therefore, why look at the older person as someone who is wise and tranquil and does not have an iota of lust in them? Can we for a change look at them as people who are matured (at least in age), and have similar need for a fulfilling physical intimate relationship with the desired partner, be it intercourse or gentle loving touch? Can we concede to ourselves that youthfulness may not be all that important to have a zest for life?

What are your views? What do you think?
Posted by Sharbori at 11:38 6 comments

Links to this post
Labels: men and women, perceptions, wellbeing and non well being

I found this talk both hopeful and inspiring, especially when it is so easy and"tempting" to feel overwhelmed and disillusioned in the current context of the world.

Courtney E Martin chronicles and encourages the current generation of young activists and feminists. She's the author of "Do it Anyway - the new generation of activists" and an editor of www.feministing.com
Posted by Sharbori at 10:45 0 comments

This work is licensed under a Creative Commons Attribution-NonCommercial-NoDerivs 3.0 Unported License.

Thank you for visiting my blog. I would love to hear from you about yourself, your life, opinions, views, thoughts and whatever else you may like to share. I would welcome your comments and views about my blog and the content.
Stay well and take care.

Sharbori
Bangalore, Karnataka, India
I find it difficult to describe myself, but if I were to try, I would say I am passionate, opinionated, straight forward, romantic, idealistic, quite stubborn and very determined. I write my blog primarily to express what I think and feel about various issues around me and in the world around. I also write my blog to connect with fellow bloggers and readers like you. I am interested in connecting with new people and new experiences. Blogging also helps me to learn new things everyday about the world, yourself, and me.

I am a member of 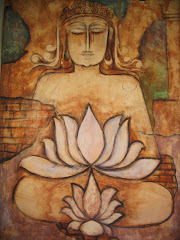